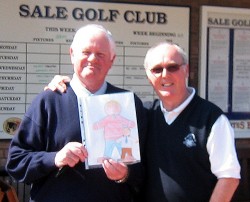 On Sunday 19th April Sale Golf Club hosted Mere Golf and Country Club in an Alliance match. You will by now of course know that Sale won this match 4 & 3.

The whole afternoon was a joyous occasion and the match was played in the friendliest of spirits.

The Team was led out by our Captain Tony Ball partnered by Dick Browne and they were cheered off the First Tee by Flat Stanley.

Who is Flat Stanley?

Stanley Lambchop had an accident one day when a bulletin Board fell on him and made him flat.

So now he can do things that we can't. For example he can send himself through the mail to his grandparents.

At school Danny Browne's class - in America - is learning about maps and places in the world.

He has been sent to England because the class wants to see where he goes. Danny asked for photos or postcards to show just where Stanley visited and our Captain was delighted that he turned up at Sale Golf Club to cheer us on.