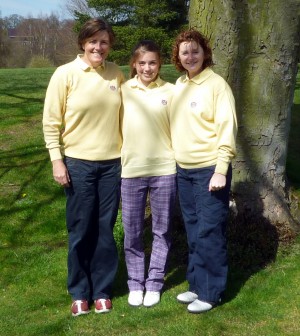 There were some familiar faces from Sale GC in the team at the inaugural East vs West Cheshire friendly county fixture on the 11th April 2010.

The format was better ball and the event was held at Prestbury Golf Club.

Hilary Tarleton teamed up with Clare Fry from Royal Liverpool Ladies. Gemma Clewes was paired with Gill Mellor from Prestbury and Cath Rawthore played with Natallie Cowley from Crewe GC.

The result was a very friendly draw. The teams retired to the Legh Arms in Prestbury village for a detailed post match analysis, and a swift drink !!