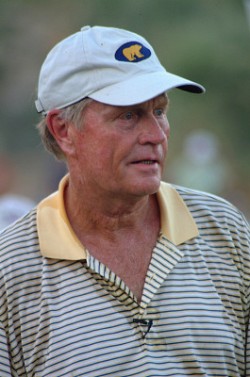 The second day was spent at Royal Birkdale again entertaining and supervising the RBS customers. I got the opportunity to work along side Jack Nicklaus doing a short game clinic. Watching and listening to the great man demonstrate a variety of shots to play around the green was just amazing!! I was then thrown into the deep end having to demonstrate a couple of bunker shots using Jack Nicklaus's sand wedge!! Nervous was not the word!! Thankfully I did myself proud. After we finished the clinic I got to spend 10 minutes asking the Great Man any questions which I had. I then moved over to the practice ground where I spent an hour doing a long game clinic with Luke Donald. Now this guy does make the game look easy. Just watching this calibre of player helps anyone with their game.

The experience was just awesome! I even managed to beat Luke. Unfortunately it wasn't at golf. It was around Monte Carlo in a Formula 1 simulator. Maybe the next time it will be Lewis Hamilton.